Well that was a month and a half, and then some more, with also another few weeks thrown in for good measure!

PretendyDriving
Yes, yes, more of that sort of thing. The month started with the final round of the Nurburgring Endurance Championship, where I was wrecked three times by other cars from faster classes, once an utterly awful rejoin, and twice where people just drove straight into the back of me. Incredibly frustrating, and left me finishing 21st overall, which I shouldn’t be too annoyed about, because there were 989 drivers who entered the MX-5 class of the championship, but it was still annoying. Sometimes racing do be like that though, and I lodged a protest against all three drivers, all of which were upheld.

The month finished strongly though, with DaveCam’s Big Grid community races, where in the first race, I managed to qualify 10th, and finish 9th, which is pretty good in a stacked field of 62 cars. For further confirmation that I “did ok” take a look at the top ten, in particular the iRating, shown here as the numbers on the white background toward the right of the screen grab. Yup, punching above my weight there… 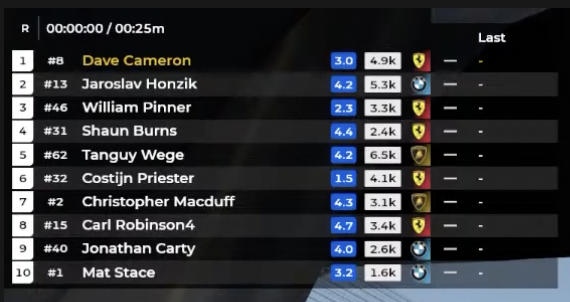 I might even try setting up another profile and seeing if I can somehow map the sliders to be throttle/mixture/etc controls in MS Flight Sim, which I’ve been giving a go thanks to a £1 for one month introductory offer of the X-Box on Windows gaming subscription service.

Random Linkage
I discovered UTM, a bit of software for running virtual machines on new mac silicon. It seems pretty decent to me, so thought I might as well drop the link here.

The Rest of Stuff
Did I mention that it was a month and a half and then some? Well the other “highlights” of October include catching the ‘rona, selling my flat, going Out-Out, and having an offer accepted on what will hopefully become my new home. Even though it doesn’t have super-fast internet available, so going from my current 360Mbps to around 60Mbps is going to be painful. At least Community Fibre haven’t gotten around to actually switching on their services in my existing flat, because going to an FTTC connection from 3Gbps would have really sucked. And yes, of course I’d have taken the 3Gbps service, because sometimes, you just gotta flex, right?